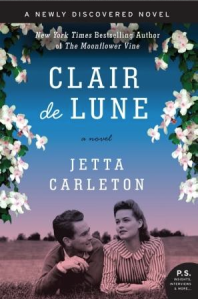 Summary: Young, intellectual, attractive and single, Allen Liles is a new-on-the-job college teacher. She begins an after-school group to discuss poetry and literature with students, but the group’s numbers quickly dwindle down to just her and two boys, George and Toby. Allen and the boys start up a friendship and together they go out to eat, philosophize, watch movies and have beer and potato chips at Allen’s apartment. It’s all innocent fun and games until Allen and Toby’s relationship becomes more than just an after-school friendship. Suddenly, Allen’s entire career is jeopardized and with her reputation at stake, what is Allen to do?

I started reading because I read Jetta Carleton’s other book, The Moonflower Vine, and liked it so much that I reread it twice. I also thought it was interesting that this book was “newly discovered” and recently published, even though it was not recently written.

I kept reading because it was very engaging, I had to see what Allen would decide to do and what would happen. I read it in one day!

I would give this book  8/10 stars, because the story flowed and the writing style is unique, fluid and honest. I loved the picturesque, rural setting and the developed, individual characters. Allen’s enthusiastic and spontaneous personality was relatable and appealing. The ending felt rushed though, and the plot had a few poorly patched holes. These were minor flaws though, because the rest of the story was amazing.

I loved almost everything! The setting, the characters, the dialogue and the smooth, slightly old-fashioned word choice. The cover is very elegant too.

I hated the abrupt ending, it left me wanting to know more about Allen, and where she would go next in life.

If the lead character Allen could bring one thing to a deserted island, she would bring lots and lots of books.

Anything else we should know?  It’s a great book, go check it out at your library right now!