Why hello there, all you Push To Talk readers! The Greenwood Teen Advisory Board is proud to present you with this month’s issue of the Monthly Book Horoscopes, which are book recommendations based on YOUR Zodiac sign!

It’s May, and that means that the end of the school year is finally within reach. We thought we might take a look back and celebrate what school is actually all about (and no, it’s not torture)… learning! Each year we read a lot of great books in school, so this month’s issue consists of books which we were forced to read for school and ended up loving. We hope you enjoy them as much as we did! ❤ 🙂

Aries Haroun and the Sea of Stories by Salman Rushdie

This beautiful story tells the tale of Haroun, a boy who, in telling his own story, discovers what exactly makes stories and storytelling so important. The book is full of adventure and fun magical realism!

We know what you’re thinking. “Seriously? That book sounds soooo boring…” Not so! Great Expectations is fun, and nowhere near as dry as you may expect. It’s a classic… you HAVE to read it! 😉

Originally published in 1856, this groundbreaking novel sent major, scandalous waves crashing through French society. It cleverly satirizes society in a way that is also quite dark, intense, and somewhat sad.

This book is a tragic and important memoir. Elie Wiesel describes his experience as a Jewish prisoner in the concentration camp Auschwitz-Birkenau. Though it is short, it is well-written and very meaningful.

Leo As I Lay Dying by William Faulkner

This book is told from the perspectives of members of a poor southern family when their mother dies, leaving them questioning the value of their existence and relationships with others while their family begins to fall apart.

This book tells about the lives of four Chinese immigrant families in San Francisco. It tells about the struggles of living as an immigrant in America, and the story is centered on the game of mahjong, which they play together.

If you haven’t read 1984 yet, you should, because it is essentially the prerequisite to all those fun YA dystopian books we are seeing so much of today. The thrill and caution of this classic will haunt you for a while. Remember, Big Brother is always watching so he will know if you don’t read it!!

Scorpio A Raisin in the Sun by Lorraine Hansberry

This is a raw and moving play about an African American family living in the 1950s. They not only struggle to prosper in a discriminatory society and to coexist with one another in a difficult environment.

Do not dismiss this novel based purely on its reputation as a “romance novel.” Give it a read and you will be blown away by the hilarity and brilliance of Jane Austen’s wit as she satirizes the society of Regency England.

Legend takes place in the Republic, the dystopian remnants of the western United States. Day is 15 and has failed his Trial, making him the most wanted criminal in the Republic, and June, another 15-year-old, is commissioned to hunt him down and kill him. Nobody expected what happens next…

While this book is intended for a younger audience, it has a beautiful message that is prevalent to people of all ages. This little prince will remind you to live life with an open imagination and a kind heart.

Pisces Running in the Family by Michael Ondaatje

This autobiographical novel explores many different writing styles and methods as Michael Ondaatje retells his own story along with that of his family. This book is full of beautiful imagery and careful examination of the relationships we have with other people.

Thank you so much to everyone who has been reading these Horoscopes so far this year. We hope we’ve taken care of you and that you’ve found something good to read every month. We love you (almost as much as we love books)!! Happy reading!

No, no, go not to Lethe, neither twist
Wolf’s-bane, tight-rooted, for its poisonous wine;
Nor suffer thy pale forehead to be kiss’d
By nightshade, ruby grape of Proserpine;
Make not your rosary of yew-berries,
Nor let the beetle, nor the death-moth be
Your mournful Psyche, nor the downy owl
A partner in your sorrow’s mysteries;
For shade to shade will come too drowsily,
And drown the wakeful anguish of the soul.

But when the melancholy fit shall fall
Sudden from heaven like a weeping cloud,
That fosters the droop-headed flowers all,
And hides the green hill in an April shroud;
Then glut thy sorrow on a morning rose,
Or on the rainbow of the salt sand-wave,
Or on the wealth of globed peonies;
Or if thy mistress some rich anger shows,
Emprison her soft hand, and let her rave,
And feed deep, deep upon her peerless eyes.

She dwells with Beauty—Beauty that must die;
And Joy, whose hand is ever at his lips
Bidding adieu; and aching Pleasure nigh,
Turning to poison while the bee-mouth sips:
Ay, in the very temple of Delight
Veil’d Melancholy has her sovran shrine,
Though seen of none save him whose strenuous tongue
Can burst Joy’s grape against his palate fine;
His soul shalt taste the sadness of her might,
And be among her cloudy trophies hung.

I leant upon a coppice gate
When Frost was spectre-gray,
And Winter’s dregs made desolate
The weakening eye of day.
The tangled bine-stems scored the sky
Like strings of broken lyres,
And all mankind that haunted nigh
Had sought their household fires.

The land’s sharp features seemed to be
The Century’s corpse outleant,
His crypt the cloudy canopy,
The wind his death-lament.
The ancient pulse of germ and birth
Was shrunken hard and dry,
And every spirit upon earth
Seemed fervourless as I.

At once a voice arose among
The bleak twigs overhead
In a full-hearted evensong
Of joy illimited;
An aged thrush, frail, gaunt, and small,
In blast-beruffled plume,
Had chosen thus to fling his soul
Upon the growing gloom.

So little cause for carolings
Of such ecstatic sound
Was written on terrestrial things
Afar or nigh around,
That I could think there trembled through
His happy good-night air
Some blessed Hope, whereof he knew
And I was unaware.

He’s the Twistable Turnable Squeezable Pullable
Stretchable Foldable Man.
He can crawl in your pocket or fit your locket
Or screw himself into a twenty-volt socket,
Or stretch himself up to the steeple or taller,
Or squeeze himself into a thimble or smaller,
Yes he can, course he can,
He’s the Twistable Turnable Squeezable Pullable
Stretchable Shrinkable Man.
And he lives a passable life
With his Squeezable Lovable Kissable Hugable
Pullable Tugable Wife.
And they have two twistable kids
Who bend up the way that they did.
And they turn and they stretch
Just as much as they can 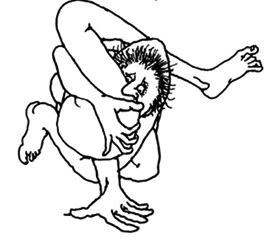 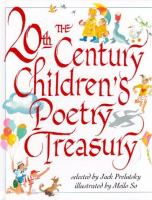 Illustrated by: Meilo So

“Prelutsky combed more than 4000 poetry volumes to select 211 poems by 137 poets. His sampling includes established poets like Langston Hughes, Shel Silverstein and e.e. cummings, but, to Prelutsky’s credit, not necessarily their best-known works. The overriding mood is rollickingly upbeat, uncharacteristic for a form renowned for its adeptness at expressing moments of grief or loneliness. Its unvarying tone notwithstanding, this eye-catching collection is likely to lure both future fans of verse and poetry devotees.”

“Christine Heppermann’s powerful collection of free verse poems explore how girls are taught to think about themselves, their bodies, their friends–as consumers, as objects, as competitors.

Based on classic fairy tale characters and fairy tale tropes, the poems range from contemporary retellings to first person accounts set within the original stories. From Snow White’s cottage and Rapunzel’s tower to health class and the prom, these poems are a moving depiction of young women, society, and our expectations.

Poisoned Apples is a dark, clever, witty, beautiful, and important book for teenage girls, their sisters, their mothers, and their best friends.”

Out of the Cave

my sheep move like a rolling tide, swarming out of their pens and into the world

Outside, I know, the grass grows green and tall, pines reaching into a sky

as blue as the lakes, as clear as tears and as cold as death.

And yet, I cannot see it, can no longer make sense of the world through my eye,

relegated to touch and hearing, inferior senses in my mind

I am scorned, a wretched flawed creature in the minds of my neighbors.

I am alone in the world, without cause or purpose, except the care of my sheep.

And now I truly live in a cave, for even at highest noon, all I can see is darkness.

Ever since that monstrous trickster Odysseus, masquerading as a nobody,

Struck me blind, burning my flesh, lashing my mind with fire and destruction.

Unable to fight me like a true hero, he tricked me with twisted wiles

to destruction, as hot as the deepest depths of Tartarus.

But as much as I blame the man, I know where the true fault lies:

with the deathless gods above, the cold, capricious ones,

The ones who favored Odysseus so much, lending him courage, wits and strength

It is not wise to curse the gods, but I do so anyway, angry at the way they exalt their

puny humans, their little heroes,  so far insignificant to us mighty Cyclopses.

Only one god, our father, Poseidon, loves our race. To the others, we are crude

And even if the gods pretend they love us, sending us rains to grow our food and

warm winds, we know the truth. For if they truly loved us, I would be able to see,

Free to walk the world, and see the light and darkness both, not just one.

No longer stuck in the cave.