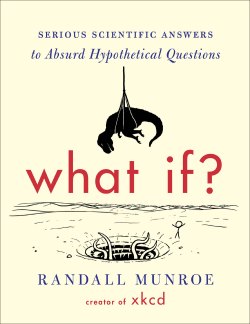 Title: What If?: Serious Scientific Answers to Absurd Hypothetical Questions

What If? can finally answer some of my more whimsical questions, like what would happen if every person on earth aimed a laser pointer at the moon at the same time – would it change color?  On the flip side, if my dad ever got his hands on it — it would put an end to our late-night discussions.  But enough with the backstory; let me tell you about the book.

Personally, I adore this book.  I love almost every bit of it.  I enjoy seeing questions other people would ask.  My favorite section is the Weird (and Worrying) Questions from the What If? Inbox.  In these sections, hypothetical questions are not answered, questions posed are hilariously weird (and worrying).  For example, page 14 has the question, “How many housese are burned down in the United States every year?  What would be the easiest way to increase that number by a significant amount (say, at least 15%)?”   Another gem  (I really like the weird and worrying questions – I cannot emphasize that enough) is:  “What sort of logistic anomalies would you encounter in trying to raise an army of apes?”

This book may be good for fans of Mythbusters because it applies science to the absurd.  It is also for anyone who enjoys illustrations of stick people acting out responses to questions.  Finally, I recommend this book for any fan of science.  The scientific explanations are written in an accessible and humorous way if you are a math genius.  In other words, it is hilarious.

Title: An Abundance of Katherines

Summary: Colin Singleton was proclaimed a prodigy at a young age. That’s a lot to live up to. While he tries to piece together what he’s going to do with his life, he attends high school and has curiously only dated girls named Katherine. The novel consists of Colin and his friend Hassan’s summer adventures before the first year of college, as well as flashbacks to Colin’s experiences with several of the Katherines. In order to get Colin’s mind off of his most recent Katherine break up, Hassan encourages Colin to come on a road trip with him. The pair doesn’t have any place in particular in mind, but they end up in a small southern town called Gutshot, Tennessee. Colin and Hassan’s search for what to do with their lives ensues.

I started reading because: I like John Green’s work.

I would give this book 9/10 stars because it’s humorous, it’s relatable, it’s intelligent, and it’s fun to read.

I loved that Colin’s last name was Singleton. He has always been the dumpee instead of the dumper so it’s only fitting that his last name be Singleton.

I hated… I don’t know if I really hated any part of this book. Like I said, it’s my favorite by John Green.

Anything else we should know? There are also some really cool footnotes and if you’re into math there are some graphs and other mathematical equations. Don’t be annoyed if you’re not into math though because I’m not really either but John Green introduces the math rarely and in such a funny way that you barely even notice it’s real math. You don’t even have to do any work. No solving for x or cosine or anything, I promise.