I know a number of parents who are worried about their teen sons and daughters reading all these vampire novels.  They wonder why their kids are so interested in the dark side, and whether they should take their kids to therapy, or church.

Anyway, in light of the fact that most of you have read Twilight by now and are probably waiting with baited breath for the next novel in the series, Breaking Dawn or the Twilight movie to premiere, here are four other great vampire novels, taken from our own Top Teen Reads: Vampires list. 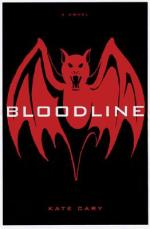 Bloodline by Kate Cary
A new generation of Dracula’s descendents fight to find their own paths, while discovering horrifying family secrets in this gothic horror/mystery/romance novel.

Silver Kiss by Annette Curtis Klause
Zoe’s mom is dying of cancer, her father is distracted, and her best friend moved away. She feels utterly alone until she meets Simon, who wants to avenge his own mother’s death, over 300 years ago.

Peeps by Scott Westerfeld
In a world where a parasite turns people into vampires, reformed party boy Cal Thompson learns that he is a carrier. He must now track down all the girls he unknowingly infected before they create more ghouls.

Midnight Mass by F. Paul Wilson
As bloody night descends across America, Father Joe and Rabbi Zev raise the stakes and bring them down on the heart of a grisly vampire plague.